Ryanair, Europe’s No.1 airline, today (29th March) marked the opening of its new base at Newcastle, with two based aircraft, representing an investment of $200m and 60 new direct jobs, alongside the launch of the Newcastle biggest ever schedule including 19 total routes, of which 10 new exciting summer routes to the likes of Gran Canaria, Ibiza, and Paphos. Ryanair will operate over 130 weekly flights for Summer 2022 (over 40 more than pre-pandemic Summer 2019) to give Newcastle’s holiday makers an abundance of choice to top European destinations in Italy, Spain and England whilst also giving UK tourism a much-needed boost after two lost Summers. 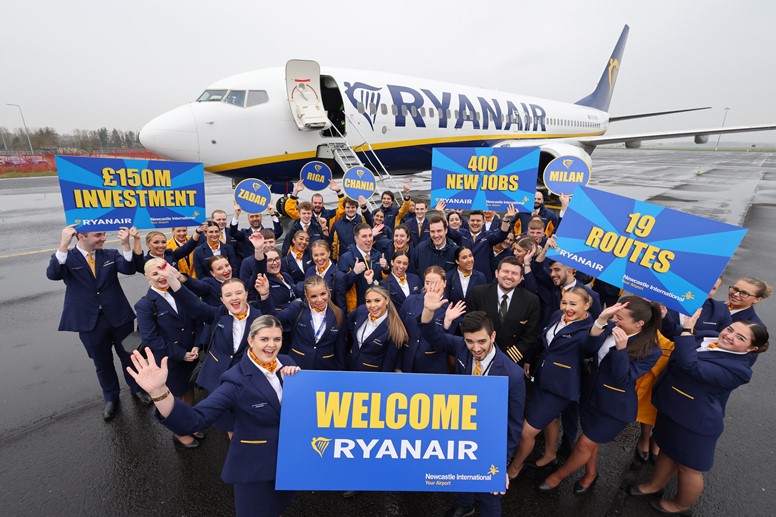 With 19 routes to choose from, Newcastle customers can now book a well-deserved getaway, flying on the lowest fares to exciting destinations such as Chania, Fuerteventura, Gran Canaria, Ibiza, Krakow, Menorca, Milan, Paphos, Riga, and Zadar.

From Newcastle, Ryanair’s Director of Marketing, Dara Brady said:
“Ryanair is thrilled to announce its largest Newcastle schedule that offers 130 weekly flights across 19 routes, including 10 new routes to fantastic destinations as Chania, Milan, and Zadar. The opening of this base and introduction of these new routes from Newcastle reinforces our commitment to increasing connectivity, travel options and inbound tourism to the area as Ryanair will now offer 40% more capacity than it did pre-pandemic.

We are delighted to open this new base and strengthen our relationship with Newcastle Airport, which will now host a fleet of two Ryanair aircraft."

To allow our customers and visitors to/from Newcastle to book their Summer getaway at the best possible fare, we are launching a seat sale with fares available from £19,99 for travel from March to October, which must be booked by Thursday 31st March. Since these amazing low fares will be snapped up quickly, customers should log onto www.ryanair.com to avoid missing out.”

From today, Ryanair will operate a total of 19 routes from our Airport, including the brand-new destinations of Zadar in Croatia, Chania in Crete, Milan in Italy and Riga in Latvia. We look forward to welcoming even more Ryanair passengers through our doors this summer.”