The latest statistics show the airport grew its passenger numbers 10% in 2017 and this year, enjoyed its best start to a year since 2008, with more than 283,000 passengers passing through its terminal in January alone.

Baroness Sugg was visiting Newcastle International Airport as part of Northern Powerhouse International Week, in which the Government is celebrating the global success of businesses in the North. 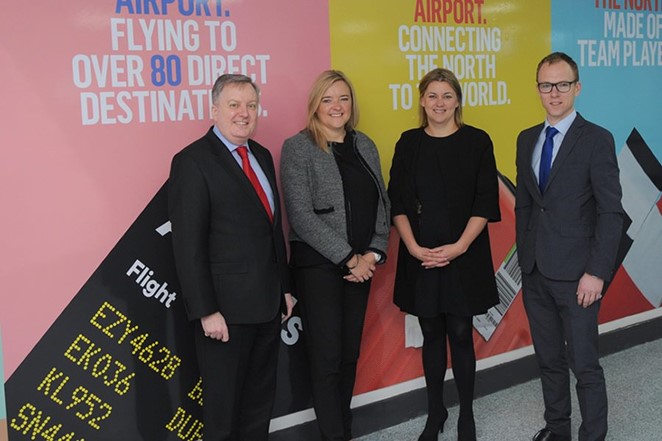 And the airport, which was also today announced as an official Northern Powerhouse partner, represents a fitting example of that success, with its new passenger numbers underlining the growth in tourism and business in the north.

The leap comes on the back of a series of extra routes opening up at the airport in recent years, with additional flights to a number of destinations including Madrid, Warsaw and the return of Berlin.

"These latest statistics just underline how the northern economy continues to go from strength to strength.

“Newcastle International Airport is undoubtedly one of the North East’s great success stories, bringing thousands of jobs and vital links with countries around the world.

“And we are determined to help boost productivity in the region even further, starting with the significant investment we're making in transport infrastructure to improve connections between the North’s towns, cities and counties.”

As passenger numbers grow, the need for better connectivity increases and the Government is responding with more than £13 billion worth of investment in transport across the North East through to 2021.

And with multiple daily flights from Newcastle to Heathrow, the region is also in line to benefit from an expanded Heathrow, with the potential for new jobs and business opportunities.

The Government will provide funding which will go towards upgrading the A1 and completing the route from Newcastle to London as well as improvements to the Tyne and Wear Metro, an important link between Newcastle Airport, Newcastle, Gateshead and Sunderland.

These projects will benefit from the biggest investment in the North for a generation underlining the Government's commitment to improving journeys for people across the entire region and delivering greater connectivity to the North East’s largest airport.

Newcastle International airport, which operates to more than 80 destinations directly and an international hub network, including Dubai, Paris and Amsterdam, supports more than 15,000 jobs with 4,500 of those on site and serves a catchment area which contributes more than £1.6 billion to the regional economy every year.

“I’m delighted that Newcastle Airport has been announced as an official Northern Powerhouse partner today by the Aviation Minister.

“As the North East’s largest airport, we’re already going a long way to facilitating a truly ‘global North’ and we’re committed to continuing to help the region achieve its best in the future, whether that’s through our work promoting the North East to overseas visitors, our role as international gateway for Great Exhibition of the North, or simply our extensive worldwide connections.”

“Newcastle International Airport is hugely important to the North East, both as a gateway for the region and as a generator of jobs and millions of pounds for the local economy. The Airport is critical to the regional economy, providing connections across the world, either directly or via a number of major hubs. We have already demonstrated with Emirates that we can both secure and make a success of a game changing new air route.

“The team behind Newcastle International airport and its shareholders work tirelessly to open up new market for both our leisure and business customers and I am delighted that today the Airport is being announced as an official Northern Powerhouse Partner, which will help to further increase the important role the Airport plays.”

More than £58 billion and 15,000 jobs have already been created by foreign investment in the region and as an official partner, Newcastle International has committed to helping the North attract new jobs and more investment.

They will work jointly with a number of other partners to promote the strengths of the North in four key areas:

This formal commitment will also see Newcastle International work to proactively promote and publicise the successes of the Northern Powerhouse. Passengers travelling through the airport will also see evidence of this with branding appearing across the site.