Use the timeline below to navigate through our history: 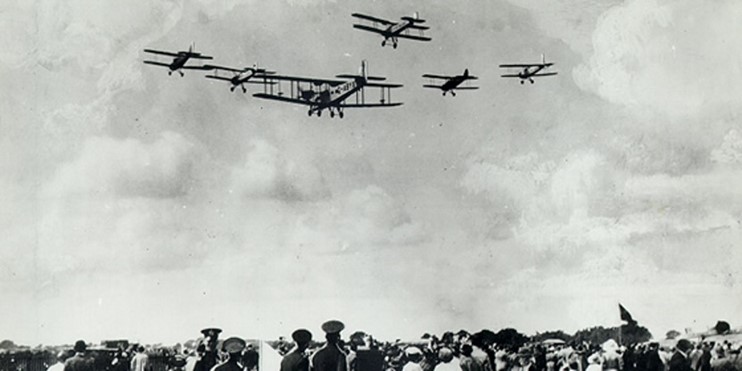 Newcastle Aero Club was founded in 1925 with the establishment of an airfield in Cramlington to the north of Newcastle. When Newcastle Airport opened in Woolsington ten years later, the Aero Club relocated to its current site. It boasts the enviable record of being the oldest flying club in the country.

Newcastle Airport was opened on 26 July 1935 by Secretary of State for Air, Sir Phillip Cunliffe-Lister. The airport cost £35,000 to build and consisted of a grass runway, clubhouse, hanger, workshops and a garage. The runway lights consisted of a series of empty oil drums that could be filled with oil rags and lit in advance of an approaching aircraft! 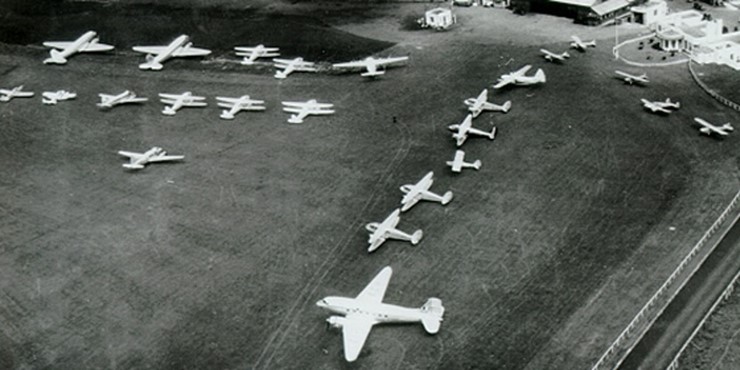 The airport was requisitioned as an auxiliary wartime base for the RAF during the Second World War. When it was handed back in 1946 it had a new wooden air traffic control tower that was built on stilts and supported by sections of railway lines.

Former RAF pilot Jim Denyer was appointed the Aero Club’s chief flying instructor in the summer of 1951. Just a year later in 1952, he was appointed Airport Commandant, then Manager, establishing himself as the driving force behind the development of the airport until his retirement in August 1989 after an incredible 37 years in charge.

In 1952 Hunting Air Transport commenced flying to Bovingdon in London. Further routes were soon added - to Dublin, Amsterdam and Dusseldorf.

The 1950s saw the start of package holidays, with 'exotic' trips to Isle of Man, Isle of Wight and Channel Islands becoming available from Newcastle Airport. By 1954, scheduled services totalled some 35 per week, and passenger numbers reached 5,500 a year. 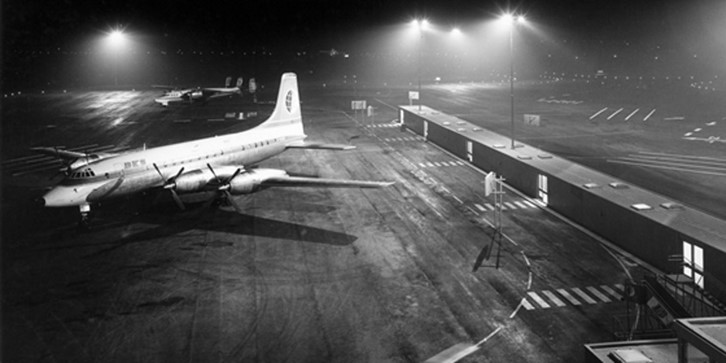 A new North East Regional Airport Committee was formed in April 1963, paving the way for major development. The new Committee, comprising the local authorities of Newcastle, Gateshead, South Shields, Northumberland, Durham, Tynemouth and Sunderland, shifted the fundamental nature of the airport, making it a springboard for regional development.

Construction of a new terminal was completed in 1966. On February 17, 1967, Prime Minister Harold Wilson officially opened the new terminal building.

The 1960s saw a boom in foreign sunshine holidays, especially to Spain. Within six years passenger figures had doubled to 700,000 per year.

In 1978 the Government designated Newcastle Airport Category B status which meant it became a regional international airport with a mandate to provide short and medium-haul scheduled international services.

By November 1978, a visionary expansion plan had been drawn up, with a 4,000 sq m terminal expansion as its centrepiece. It featured a new passenger pier and an airside departure lounge. The £8m development attracted £2m support from the European Community.

In the 1970s the arrival of jet aircraft triggered major expansion in the package holiday market. The first wide-bodied jumbo jet landed from America with a party of 380 people onboard. 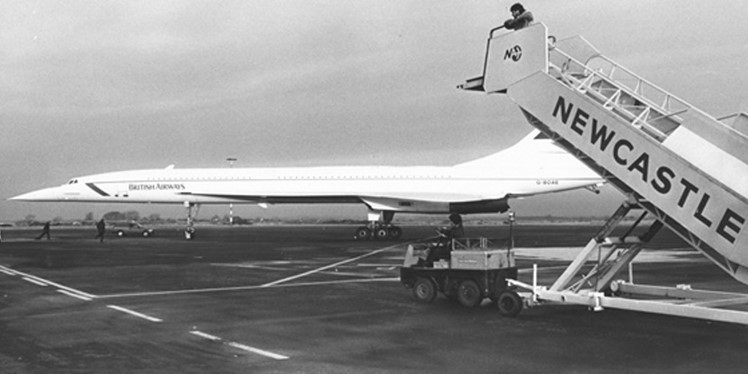 In 1980 the airport reached the milestone of 1 million passengers travelling from Newcastle in a year. The new expansion plans were completed, delivering improved check-in, lounges, catering and duty free facilities. A new parallel taxiway was constructed to speed aircraft turnaround times and greatly simplify ground manoeuvres.

Jim Denyer retired in 1989 and his role was filled by Trevor Went. Under Trevor Went’s stewardship, the airport placed considerable emphasis on expanding its network of scheduled routes, both domestic and international. Towards the end of the decade passenger numbers had reached 1.6 million a year.

In 1991 Nexus constructed an extension to the Metro system linking Newcastle International Airport to the city and beyond, dramatically improving rail access to the airport.

In 1991/92, while some airports in the Midlands and the south of England recorded traffic losses of more than 20 per cent in the wake of the Gulf War and recession at home, Newcastle Airport was busy recording an impressive rise in traffic to a new record of 1.67 million passengers per year.

Whilst the number of passengers on both domestic and international scheduled routes had continued to show steady growth, the increase in charter holiday traffic was astounding, up 43 per cent in 1992/93 compared with the previous year. By 1993, passenger figures had hit 2 million.

Based on a turnover of £25.6 million Newcastle Airport was now ranked as the 117th largest company in the North East and 39th based on profit.

An extended and improved terminal building was opened on May 26, 1994 by the Princess Royal. 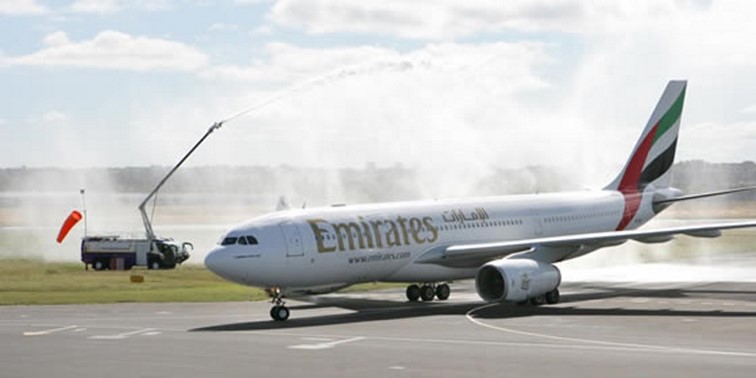 By 2000, passenger figures had reached 3 million per year. A major £27 million terminal extension to double the size of the check-in hall was officially opened by Prime Minister Tony Blair in October 2000.

On May 4, 2001 the seven local authority share holders sold 49 per cent of the shares in the Airport Company to Copenhagen Airports, paving the way for an unprecedented period of growth and development which would transform Newcastle into one of Europe’s most successful regional airports.

The skies turned orange in March 2003 with the arrival of easyJet to Newcastle. This hugely significant event heralded the start of the low-cost revolution in the North East.

The new ‘Newcastle International’ brand was launched in October 2003. A new brand, extra capacity, new routes and multi-million pound developments were all announced. 2003 was another record-breaking year for passenger figures too, hitting 3.9 million.

In August 2004, local celebrities Ant and Dec opened the latest terminal extension which doubled the size of the departure lounge and provided a wide range of new shops, services, restaurants and cafes.

Newcastle International secured its first ever scheduled long-haul route with Emirates Airline, flying daily direct from Newcastle to Dubai and opening up onward connections to over 50 destinations. The route launched on September 1, 2007 and quickly became Emirates’ best performing new route in the UK.

A new state-of-the-art £8m air traffic control tower was opened in September 2007 by Rt Hon Nick Brown MP and the president of Emirates Airline, Tim Clark. At 45 metres tall, the Emirates Tower is over twice the height of the Angel of the North.

On November 8, 2007 Dave Laws was appointed as the airport’s new chief executive. Dave has worked at the airport since 1978, starting his career as a fire officer then working his way through many areas of the business including health and safety, personnel, passenger services, aeronautical relations and commercial.

2010 saw the airport celebrate its 75th anniversary with a year of special events. On the anniversary day itself, 26 July, a number of airline partners marked the occasion by operating aircraft rarely seen at Newcastle, which brought in thousands of aviation enthusiasts and the general public alike.

In 2011, the airport completed the sale of the new hotel building on site, handing the keys to the DoubleTree by Hilton brand, bringing a fantastic new name to the range of high-profile companies already in place at the airport.

2012 saw the completion of a £3.2m terminal development, creating an additional 5,242 sq ft of security search accommodation. The enhanced area will be equipped with the latest in security screening technology to ensure that the customers pass though this stage of their journey as swiftly and comfortably as possible.

Copenhagen Airports sold its stake in Newcastle Airport to AMP Capital of Australia in autumn of 2012.

In October 2014 the airport announced the region's first scheduled transatlantic service and on the morning of 23 May 2015 the first ever United Airlines flight from Newcastle left for New York. The service operated five days a week to Newark Liberty International Airport, connecting the North East travelling public to the Americas.

In 2015 Newcastle International Airport celebrated its 80th Anniversary. This was commemorated throughout the year with a host of special events.

September of that year also saw the completion of a £14million development of the departure lounge.

A brand new World Duty Free store was opened, along with The Cabin Bar, Bar 11 and Café Ritazza.